Use of the word “fine” may be one of the most dangerous practices in sports turf. We have all done it. We all still do it:

No matter how much we pride ourselves on our diligence, we have all said one of these phrases, or something comparable. No matter how much we beat our chest about our perfectionist tendencies, at some point we have used this term (usually accompanied by a hand wave). In fairness to the Sports Turf Manager, when we use a phrase like “it’s fine” I do think we generally use it in a responsible way. Safety and playability are the most important aspects of our job, right? But what about the people involved in sports that are not Sports Turf Managers that throw this word around. Do they have the same definition?

This concept was glaringly obvious during my time at Ripken Baseball. I specifically remember managing my first significant rain event the first morning of a two-day tournament. The stadium field had taken rain and was not set up well (we had not yet transitioned to engineered soils, but that’s another topic!). I struggled to throw calcined clay around without falling. The infield was soft and slippery. I was astonished to find that the others on the field thought it was “fine.” One coach laughed and said, “these kids play on much worse at home.” This is a great example of setting the safety bar so low, just having an infield with no standing water is considered good. When I expressed my opinion of the conditions with some choice language everyone looked at me like I was crazy. Maybe if I had used better vocabulary, I could have made my point more effectively. Either way, others thought my views were extreme.

Another example in my time with tournament ball is one I have talked about often. Rain happens on day one and you hear parents saying with defiance “This is unsafe! We shouldn’t let these kids play if it’s not safe!” Rain happens on day two—the getaway day. Then you hear parents yell “Just start the game!  We have to drive home tonight!” Suddenly, safety is not paramount when it becomes an inconvenience.

So, my question to everyone is how do we define our standards?

I have almost exclusively worked in Minor League Baseball. During my career, the standards have risen dramatically. This is due to the talents of the Sports Turf Managers and the progress of the turf industry as a whole. It used to be nobody could touch the quality standards of the Major League fields. Now there are many MiLB fields around the country that are Major League quality. Taking it further, you see incredible fields in college baseball and softball. I would bet many of us have seen high school fields that would rival the professional levels—I know I have. The talent I see working in Park & Recreation is better than ever and the quality of the fields is reflecting that fact.

Unfortunately, this increase in expectations and standards is not universal. This points to the fact that universal standards are exactly what is needed. Until that happens, how do we protect the athletes that are put out on these fields? How many of us have gone to evaluate a field, given our opinion on how to fix the field and been told, “These are just kids,” as a justification not to do it right. In this scenario, you are taking a growing child (whose feet are too big for his or her body at this point in life), who has less athletic ability than the professionals and a lower skill set and throwing them out on a sub-standard playing surface—that is a recipe for disaster.

It is safe to say nobody wants to see an athlete get hurt playing sports. Sometimes the Sports Turf Manager must protect the end user from themselves. Or we must protect the athlete from the coach who just doesn’t see the problem. The best analogy I can provide is comparing these people to the teenager that walks by the sink full of dishes because they just don’t see it. We all know what that is like! I was with a board member of a softball league recently; we walked around the infield and I pointed out the drastic grade problems that needed to be addressed. To his own astonishment he said, “Now that you have pointed it out, I can’t believe we never saw this!” Remember these people are not necessarily ignoring the situation, they just do not look at a field the same way we do.

One of the more difficult tasks a Sport Turf Manager must accomplish is clearly establishing the levels of tolerance for a playing surface that match the levels of expectations from the organization for which they work. This could be associated with weeds, wear areas, mound repair and many other things, but especially budget. Separate the aesthetic from safety and communicate the expectations to employees, end users and all involved.

We are talking about standards that will keep athletes of all ages safe. Youth sports and sports tourism has become a huge industry. So how do we keep the playing surfaces from being overlooked from a safety and quality standpoint? A few thoughts:

Set your levels of tolerance. Communicate your standards. Enforce your policies. Most of all, replace the word “FINE” with “GOOD” and you will be just fine.

Based in Grove City, PA, DuraEdge Products specializes in the production of top-quality products and services for the baseball and softball industry to provide long-term soil solutions, and to cover all the bases for safe and playable infields for the Sports Turf Industry across the United States and abroad. 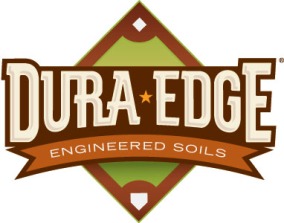